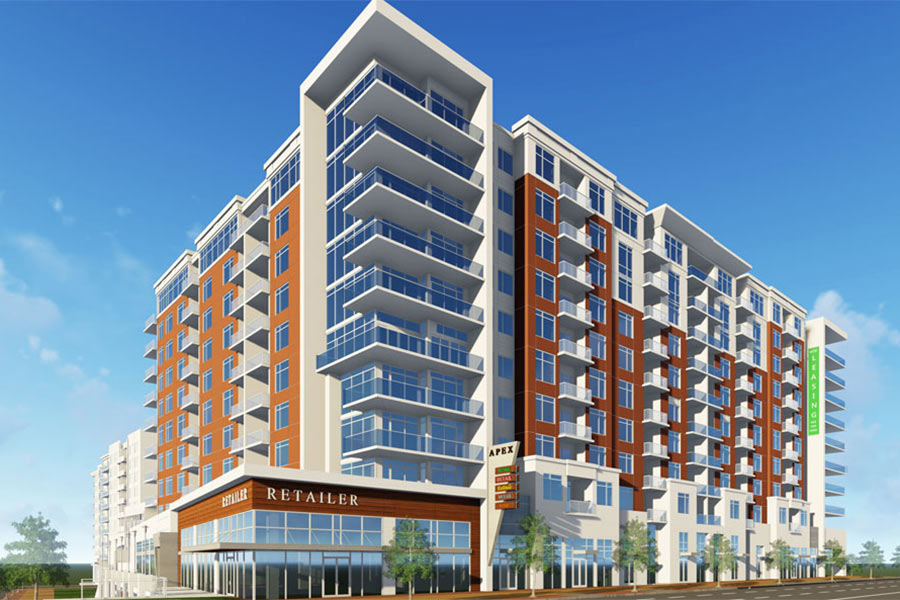 By Ely Portillo, The Charlotte Observer

A Charlotte developer has kicked off work on another luxury apartment development coming to SouthPark, one of the city’s fastest-growing neighborhoods.

Apex SouthPark will add some height at the corner of Morrison Boulevard and Sharon Road with a pair of 12-story buildings that will replace the well-known “ski slope church,” formerly Sharon United Methodist. Developer Childress Klein, along with Denver-based private equity partner Ascentris, paid $15 million for the 5.5-acre site across from SouthPark mall in a deal that closed last week, real estate records show.

The development will include 345 apartments and 88,000 square feet of shops and restaurants in the two main buildings. Amenities will include a swimming pool, fire pits, a gym with yoga and spin studios, outdoor grills and 24-hour concierge service for tenants.

Plans for the site also include a 175-room hotel with a rooftop restaurant and bar, as well as a six-story parking deck. Rebranded as SouthPark Church, the former Sharon United Methodist congregation is meeting at the nearby Regal Phillips Place movie theater. They’ll stay until the new development is complete, when they plan to move into a new space there.

Demolition and construction will start immediately. The first apartment building is expected to open in about two years, in spring 2020, while completion of the whole project is planned for the spring of 2021.

“Apex SouthPark will deliver an exciting urban experience that we believe will address the increasingly sophisticated demands of the SouthPark market. We are excited to have the opportunity to partner with Ascentris and SouthPark Church on this innovative project,” said David Haggart, retail division partner at Childress Klein.

The development will be entering one of the most crowded markets in Charlotte, one with about 2,600 upscale apartments planned, under construction or recently opened. Rule Joy Trammel + Rubio is the architect, JE Dunn Construction is the general contractor, and Bank of America will provide construction financing.

A couple of blocks from Apex SouthPark, a new development called Inspire SouthPark opened this year at Sharon Road and Sharon Township Lane, with 369 units and studio apartments that start at $1,300 a month. Amenities include a “pet spa” called Groomingdale’s and a gym with a dedicated yoga room and sauna.

On the other side of SouthPark mall, a Florida-based developer is building 203 apartments, along with shops and restaurants, at Barclay Downs Drive and Carnegie Boulevard. And at Sharon and Colony roads, owner Synco Properties plans to demolish 353 aging apartments and replace them with 990 new apartments, a 225-room hotel, 250,000 square feet of office space and 300,000 square feet of retail space, including a grocery store.

This article originally appeared in The Charlotte Observer.