SouthPark site to include hotel with upscale flag new to Charlotte

The new “Ski Slope Church” will bring another landmark to SouthPark 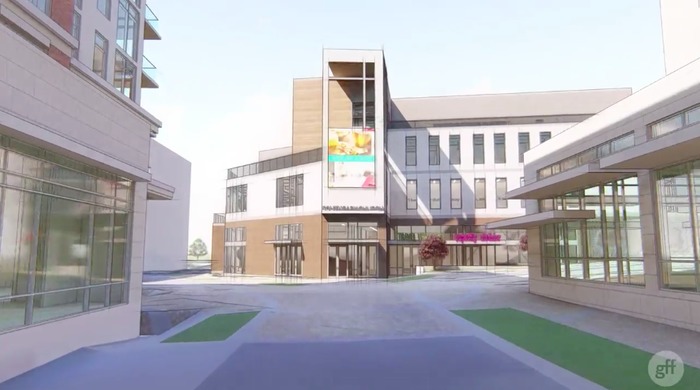 Over decades, Sharon United Methodist Church became a Charlotte landmark as the “Ski Slope Church.” This spring, the iconic building at Sharon and Morrison roads was torn down. In its place will rise a $19.8 million new church building at the heart of massive mixed-use development. Leaders of the church hope it will also become a spiritual heart of the city — and just as much of a landmark as the building before it.

Senior Pastor Kyle Thompson outlined the details of the project more than five years in the making to church members over the weekend. In the interim, the congregating has been worshipping in nearby Regal Cinemas at Phillips Place and has renamed itself SouthPark Church. “We’ve been dreaming for a while, and now dreams are coming true,” he said.

The new church building will be nearly twice as big when fully built.

The church building will be the first thing visible as you enter the property from both Sharon and Morrison roads. And from both perspectives, there will be something iconic to look at. On one side, a massive cross will rise above the church roof, bordered by glass and metal “swoosh” shape. At night, this will be able to be lit up in any combination of colors, like the Duke Energy Center. And from the other direction, the new SouthPark Church building will have an $80,000 “Times Square” style video board, with messages from the church and others rotated as advertising space.

The church building itself will be around 88,000 square feet when fully built, though construction will happen in two phases. The old ski-slope building was around 39,000 square feet. Of that, 68,000 square feet will be considered “church” space. The rest will primarily be retail space.  In the first phase, there will be a 380-seat sanctuary, children’s space, prayer rooms, modern worship space and rooftop terraces on both the fourth-floor and second-floor levels. In the future phase, the building will have a 700+ capacity performing arts space.

The church building will finish at nearly the same time as the Apex SouthPark apartments. Childress Klein is working on a $200 million, 345-unit apartment development around the church that will be filled with retail and restaurants along the ground floor. The SouthPark Church building itself will also have about 20,000 square foot of retail space on its ground floor. Construction on the church buildings is expected to start in spring 2019, with completion around summer 2020. The Hyatt-brand hotel will lag about a year behind.

Churches around the country are already looking at this model — of churches in the middle of a larger community.

When Sharon United Methodist was originally built, SouthPark wasn’t much more than a cow pasture. As Charlotte grew, so did SouthPark — and the church’s property became more and more valuable. The church received roughly $15 million from the sale of the property, which will help offset the costs of the project. Church members will raise about $1.6 million in a capital campaign as well. There are hundreds of churches around the country similarly “blessed with location,” as Pastor Thompson put it. He’s already heard interest from churches in Texas and Kentucky about doing something similar. But in the end, putting a church at the heart of a live-work-play community is far from a new idea. Towns were often built that way in America’s earlier days. And God only does a small sliver of his work within church walls. Thompson reminded church members of the Biblical story of Jesus meeting the Samaritan woman at the well. “She didn’t go to the well to find God,” Thompson said. “She went to do an ordinary activity.”

This article originally appeared in the Charlotte Agenda.