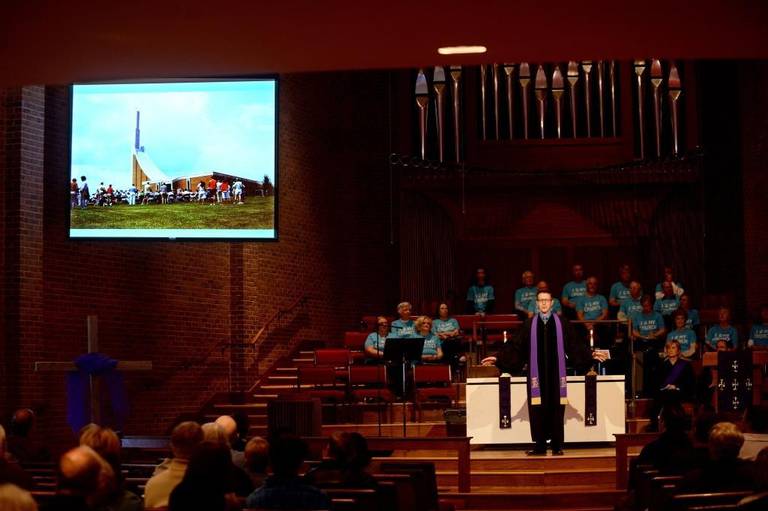 By Tim Funk, The Charlotte Observer

There were tears of grief and smiles of excitement Sunday as members of Sharon United Methodist in SouthPark said goodbye to their “ski slope” church building and looked ahead to a new start as the spiritual anchor for a future plaza of stores, restaurants, offices, apartments and a hotel. A Charlotte landmark for decades because of its distinctive architecture – a steeple and roof that look like a ski slope – the church is directly across the street from SouthPark mall. It’ll soon demolish its current building, but keep its choice location. And sometime in 2019 or 2020, the congregation will get a new 750-seat home at the center of what developers and city planners call a mixed-use development. Until then, church members will worship every Sunday at the nearby Regal Phillips Place movie theater.

When the new sanctuary is finished, they will return to the corner of Sharon Road and Morrison Boulevard and share 7 acres with a performing arts center, a fitness center, nearly 500 residential units and up to 170,000 square feet of commercial space. And their prayer is that a lot of the people who will eat, shop, work or live near the reborn church will stop in and worship there.

At a time when many United Methodist and other mainline Christian churches are declining, even dying, the nearly 51-year-old Sharon United Methodist is looking, Senior Pastor Kyle Thompson told his flock Sunday, “to literally re-launch the church … and, in a fresh way, reach the community around us,” including millennials and the baby boomers who are retiring. John Shamp, 80, was among the 400 or so congregants in the pews for the 9 a.m. service Sunday. He called it “an exciting time” for the church, which he and his wife joined in 1966, when it was brand new.

“I like how this unique plan will let us appeal to a broad range of people who don’t now have a church,” said Shamp, who retired from Proctor & Gamble and now works for a NASCAR racing team. “This is the right thing to do – for us, for the SouthPark area, and for Christ.” But Molly Warner, 20, who emerged from the same service in tears, was more focused on soon losing the church building where her parents were married, where she was baptized and confirmed, and where she has still worshiped whenever she came home from N.C. State University. “I grew up in this church. It’s hard to leave it behind,” said the sophomore, her eyes red from crying. “I know it’s just a building, but it holds a lot of memories.” Still, she added, “I think (church leaders) are going in the right direction … and this is God’s plan.”

When Thompson floated what the church now calls the “Dream Big SouthPark” idea four years ago, “some people (in the pews) were excited about it and some were adamantly against it.” After “a lot of town hall meetings,” he said, church members voted in November 2014. Eighty percent said yes, he said, and 20 percent said no. ‘WE WERE HOOKED’

Usually, churches rent movie theaters as worship space when they’re just starting out, when they don’t yet have the money or membership to build. But beginning next weekend and for a minimum of two years, Pastor Thompson will preach, the choir will sing and church members will pray at the Phillips Place theater. For charter members of Sharon United Methodist such as Shamp and Jim Langstaff, 79, what’s about to happen seems like déjà vu. When the church began in 1966, it had no building and no ski slope spire. Members worshiped at Sharon School. During what was supposed to be its first Sunday at the school, there was a mixup with the janitor and the worshipers arrived to find the doors locked. So their first worship service was held under an oak tree on the school property.

Back then, the founding pastor, the Rev. John McWhorter, would visit with newcomers who’d moved to the SouthPark area – once farmland owned by long-ago N.C. Gov. Cameron Morrison. “The pastor came knocking at our door and introduced himself,” said Langstaff. “We went to the service at Sharon School, and we were hooked.” Clarke Allen was 2 years old when Sharon United Methodist was launched. His father, Mike, a long-time Scoutmaster at the church, was the one who brought the chairs every Sunday to Sharon School.

In 1970, the church finally moved into the current building. “We used to hide under the pews,” said Allen. “This was our neighborhood.” The church was supposed to have been where SouthPark mall is now. But developers of the upscale mall suggested a swap and threw in some money. The ski-slope steeple and roof got a lot of media attention from the start. And in November 1987, a UNC Charlotte student pledging for a fraternity made headlines when he broke an ankle as he slid down the church’s steep roof at 1:25 a.m. It was part of an initiation challenge. For 30 years, church membership grew, Thompson said. Then, like other mainline churches, it started losing members. By 2012, it had lost about 50 percent of them, he said.

Now, the pastor said, there are 700 people on the membership rolls, with about 300 showing up most Sundays.

On Sunday, the Harvard-educated Thompson explained the church’s project by alluding to the Gospel story of Jesus meeting a Samaritan woman at a well and changing her life. “She went to do an everyday activity. She was thirsty and went to get water,” Thompson said. “That is the vision that we believe that God has given to us: To be a place where the sacred and the secular intersect.” Added Thompson: “We’re going to knock down these buildings to build up the kingdom of God.”

This article originally appeared in The Charlotte Observer