The new “Ski Slope Church” will bring another landmark to SouthPark 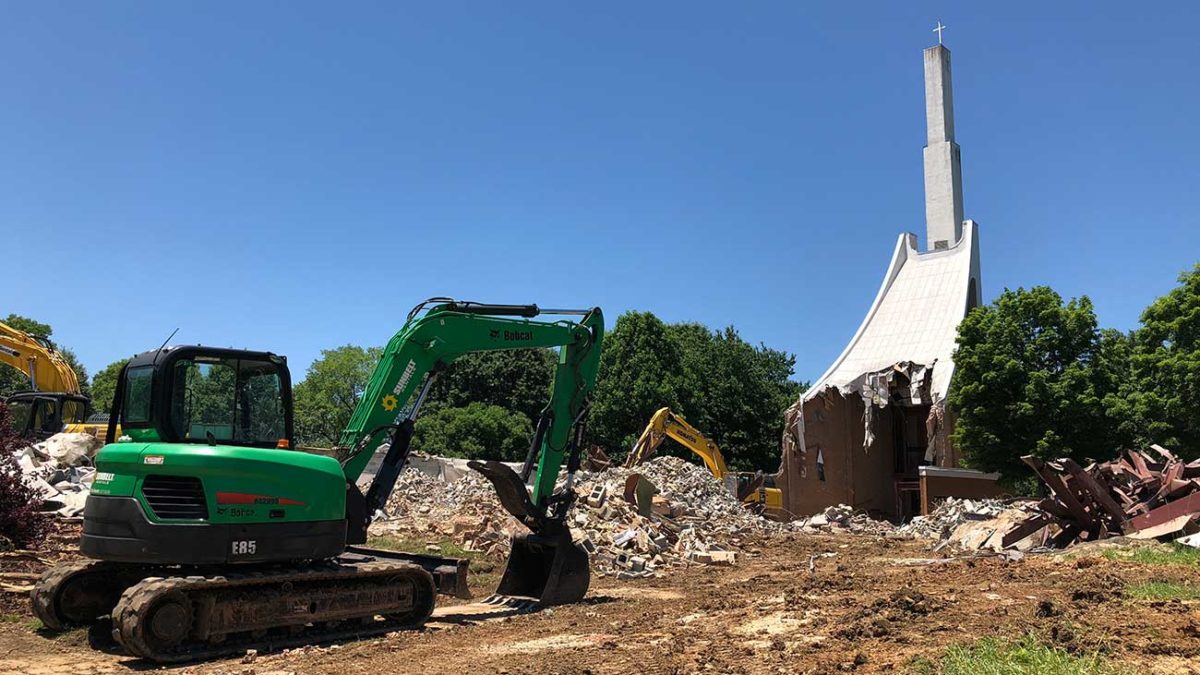 The staff at SouthPark Church has heard the criticism. That they’ve sold out. That they’ve destroyed the place where couples were wed, babies were baptized and loved ones were mourned.

Losing the iconic “ski slope” at the church formerly known as Sharon United Methodist is hard for them, too. But as more concrete plans come together, church leaders are trying to make their case that the high-profile construction project is the best way to live up to their mission.

“We’re not doing this to be just another development,” says Kevin Ache, communications director for SouthPark Church. “We’re trying to reach the community in a new way.”

Five years into the planning process, demolition of the old church building has finally begun. Today, all that’s left at the corner of Sharon Road and Morrison Boulevard is the iconic slope itself. Earthmovers and backhoes have demolished the rest. The slope is slated to be torn down Friday, but not before church leaders take down the cross atop the steeple. It’s a physical manifestation of the change that’s been evident for years now. The congregation once known as Sharon United Methodist Church since 1966 has already changed its name, to SouthPark Church. The congregation is now worshipping at Regal Cinemas at Phillips Place down the road while the redevelopment is underway.

This project is extremely “mixed use.”

One thing making SouthPark Church’s job harder is the fact that Charlotte is awash in development. You can forgive Charlotteans for being crane-fatigued. And this project from Childress Klein is couched in a lot of the same language used to describe the plethora of other mixed-use developments popping up around the city. Both church leaders and developers on the project talk about creating a “live, work, play” environment, a pedestrian-friendly streetscape, a 24/7 community.

The formula is similar, too. Childress Klein and development partner Ascentris announced in May that the project will be known as Apex SouthPark. Its two 12-story towers will contain:

But a new church building will be the project’s heart. SouthPark Church has held on to a few acres for a building of its own, a new church to hold 750 worshippers. There will also be a performing arts center open to the community. The church’s communication plan around its part is aptly named “Love SouthPark.” When they move in two years from now, the church will be surrounded by people — shoppers, apartment dwellers, diners — rather than trees and grass. It’s a bold experiment that will likely put SouthPark Church in the national spotlight among the faith community. Staying relevant is a challenge that all denominations are facing. Mainline congregations across the country are shrinking. Young people are finding fewer reasons to go to church. Some have been damaged by religion in the past. Others find it hard to enter spaces inside imposing buildings and on sprawling campuses that don’t always feel welcoming from the outside. SouthPark Church has followed the same path. Membership at Sharon United Methodist Church reached a peak of 1,357 in 1990, but had dwindled to 712 by 2015, according to the site Faith & Leadership. The transformation underway now is part of the vision Senior Pastor Kyle Thompson has for changing the dynamic. In many ways, it’s a return to Christianity’s roots in the United States. Decades ago, the church served as the central gathering place for a town. It was the social hub. That’s what SouthPark Church leaders have in mind for their new development.

“It’s really about trying to share the space with the community,” Thompson says.

Still, it hasn’t always been an easy sell. While many of the church’s founding members were on board, the development plans were divisive. Another 30 percent of members left the church after the decision to redevelop the property. Will the new audience reverse that trend? Once people are living and dining next door, how will the church bring its new neighbors in the doors? That’s the next phase. “That’s the challenge,” Thompson said. “We don’t want to be gimmicky.”

This article originally appeared in the Charlotte Agenda.